The latest commission for the imposing Duveen Gallery at Tate Britain is by sculptor Phyllida Barlow. Anyone who visited her impressive exhibition RIG, for Hauser & Wirth‘s Piccadilly gallery, would have been greatly impressed at how she was able to so totally take over such a selection of varied spaces. Using inexpensive, everyday materials such as cardboard, fabric, timber, polystyrene and plaster she created bold and colourful three-dimensional collages that utterly transformed the whole building – from the grand main gallery to the tiny former bank safe in the basement (AKUTA review here).

At the time this was her finest achievement. Not only is this better but quite amazingly she manages once again to completely command the space despite its vast dimensions. Seven distinct works somehow take over this pompous neo-classical space in one glorious, over the top, bricolage of industrial debris inspired of course by London’s docklands.

Stretching to the roof, tumbling across the floor, hanging from the ceiling and even encapsulating part of the structure Barlow’s dock has made the Duveen its own. 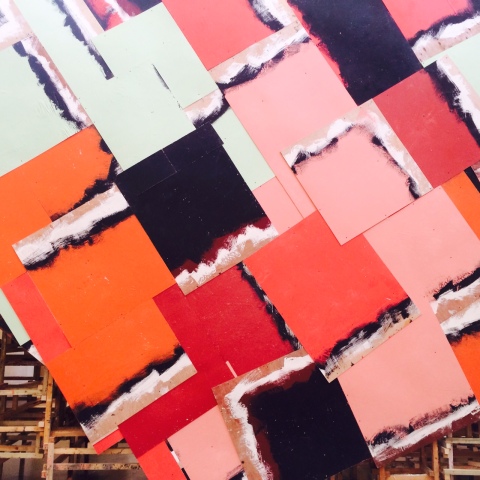 Ambitious and exuberant it is hard not to laugh out loud and the audacious transformation. Upon entering huge wooden boxes hang from a lofty timber construction. Partially broken open they reveal broken pink polystyrene foam which tumbles out whilst on the reverse painted cardboard makes a wonderfully modernistic collage.

Farther on a pile of broken pallets climbs up towards the rotunda whilst more broken and painted timbers, strewn with coloured canvas and assorted debris climbs up the wall. Opposite a grand romanesque pillar – as if an ugly embarrassment to be hidden away – is encased with cardboard and sealed with brightly coloured tape. 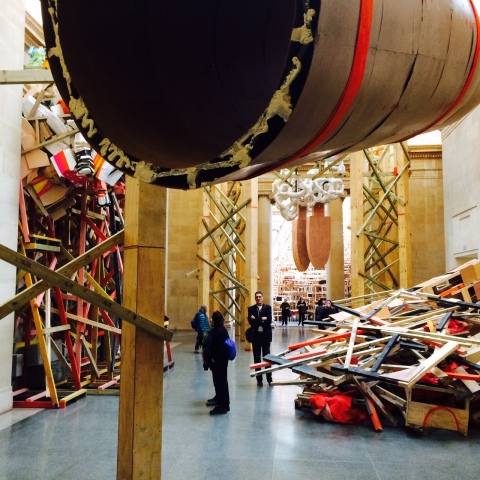 Finally, what can only be described as the cardboard core of a giant toilet roll is suspended from another gantry as a the display’s ultimate sculptural statement. 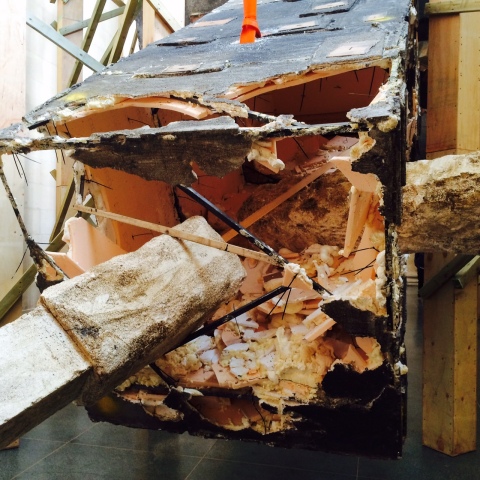 This is an ambitious work that truly works. Joyful and transformative it is a delightful contrast to self-regarding works of the world of old-fashioned and male dominated sculptural pomposity. Don’t miss.

You are currently reading Phyllida Barlow dock at Tate Britain at a kick up the arts.