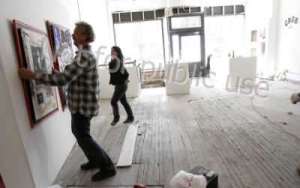 Continuing on from the public gallery top ten here are my commercial gallery selection. This was a much more difficult choice and reflects the fact that curating a commercial gallery is in many ways a harder task. The potential range of art is usually much broader – a good gallerist will need have an eye for the best of these new artists, be able to develop existing ones and at the same time, let us not forget, run a business to make money.  They have to curate interesting shows at close intervals in spaces that are often less than ideal. Many galleries can rarely exploit prime locations – with the cost of retail space in London at exorbitant levels – and they will often need to attract visitors to out-of-the-way locations.

There are however plenty of arty masochists willing to give it a go. A guideline figures for the number of London galleries is impossible to nail down – not least because they open and close faster than Wayne Rooneys flies – but it seems to be somewhere between 300 and 500.  Picking a random selection and dropping in may seem like one way to look at some art, but it will produce very mixed results. A recent trawl around a series of ‘first Thursday’ galleries in the East End nearly made me slit my wrists in frustration – I found nothing that was close to worthwhile looking at over a period of over three hours. Ultimately only a fine curry and a beer on Brick Lane saved the evening!

My advice? Try sticking to names that you may have heard of or those recommended to you. At the same time why not try popping in to their near neighbours – these galleries may be riding on their famous neighbours coat-tails but are often are looking at the same market and at least can afford similar rents. Many of the best galleries are in small clusters in key areas – Hoxton, Vyner Street and Cork Street for example although some are out on a limb and need extra effort. Some the best are big and international, some are small and inventive. Here is a brief and very flawed guide to my ten favourites:

9. Hauser & Wirth. An International giant. Represent the estates of Eva Hesse and Allan Kaprow as well as Henry Moore.  Founded in Zurich 1992, the London gallery is in a wonderful historic Sir Edwin Lutyens building on Piccadilly, another branch being on Old Bond Street and yet another opening in Savile Row on 15 October 2010. Important and impressive exhibitions by established artists but are they a little dull?

8. Maureen Paley. Ever black-clad Maureen was one of the first to present contemporary art in the East End. Promotes US and European artists as well as launching new talent from the UK. Gallery artists include Turner winners Tillmans and Wearing plus nominees Gillick and Warren.  Always interesting and worth watching her artists.

7. Gagosian. Another international monster founded by Larry Gagosian with seven galleries: four in the USA, two in London, one in Rome and one in Athens. Built on the legacy of the New York School, abstract expressionism and Pop Art it also showed then contemporary artists like Basquiat. Expect museum quality exhibitions that feature artists of the calibre of Twombly, Picasso, Bacon and Warhol.

6. White Cube was set up by Jay Jopling in 1993 and is arguably one of most influential galleries of the past twenty years. Many of the very biggest names in art have appeared here, Hirst and the YBA’s of course amongst others like Kiefer and Orozco. Has very impressive spaces in both Hoxton and St James’s.

5. Timothy Taylor. A lovely space, just next to the exclusive Connaught Hotel (drop in for tea!), they feature a fascinating mix of established names like Arad, Riley and Katz with an, always interesting, selection of contemporary artists like Martin Maloney and Philip Guston. A good place to watch recently emerged talent.

4. Lisson Gallery. An impressive history which it has continued to build upon. Founded in 1967 artists included the likes of  Sol LeWitt, Donald Judd, Dan Flavin and Art & Language with art that represented an ethos concerning art’s place in a wider cultural and social context. They have continued to feature those like Anish Kapoor and Julian Opie ‘identifying and supporting succeeding generations of artists, each with a radical and distinctive approach to the artistic possibilities  of their times.’ Always interesting.

3. 20 Hoxton Square. Facing White Cube across Hoxton Square this gallery ‘is a collaborative project space, operating as a platform for emerging contemporary artists, whilst also acting as a creative hub for independent projects.’ They also have resident artists, a bookshop, screenings, artists talks and performances. Great place to spot emerging artists.

2. Haunch of Venison. Formerly the Museum of Mankind this vast neo-classical space just off Piccadilly includes ten separate gallery spaces. Often featuring multiple exhibitions its artists are contemporary, cutting edge and top notch. The curation is excellent and the space spectacular. Sometimes the vast open areas can overwhelm the art but who can complain when it features wonderful shows like the recent Joana Vasconcelos. Sadly it is all owned by Christies and widely despised in the art world. It loses money hand over fist and may not be here long – enjoy it whilst it lasts!

1. Victoria Miro. A fabulous big white-cubey space,  a little out on a limb but near enough to Hoxton and East End galleries. Wonderful artist portfolio includes the likes of Eggleston, Neel, Doig, Ofili, Perry and Elmgreen & Dragset. The current Jacco Olivier is excellent too. Make the effort to get there and drop in to the excellent (charitable foundation) Parasol Unit gallery, next door.

Please suggest your own favourites or tell me who I should have included!

You are currently reading london commercial galleries – top ten at a kick up the arts.