Launching the cover image for his new album Olympia ageing rocker Bryan Ferry demonstrated that he is clearly suffering from more than a little senile dementia. Having studied fine art at the University of Newcastle upon Tyne under Richard Hamilton he seems to have forgotten all that he learnt.

Ferry has chosen Kate Moss to be photographed posing in the style of Eduard Manet’s infamous 1963 painting. He states that ‘Moss was the obvious choice to convey the glamorous notoriety of the original. He adds that ‘Kate has long been the ‘‘femme fatale’’ of our age, as controversial as she is beautiful and the most glamorous female icon since Marilyn Monroe. Olympia was a kind of early pin-up picture and in a sense a forerunner of some 20th century pop art, which I feel strongly connected to.’

It is hard to know where to start in this catalogue of misinterpretation. The original is not a representation of ‘glamour’ in any way.  This is a portrait of a prostitute, in her eyes we see contempt for the, assumed, male observer, mixed with melancholy and perhaps boredom. She wears cheap shoes, a shoelace necklace. The emphasis is not on the appeal of  ‘Olympia’  but on our perception of her. It is a comment on status, a reflection on Victorian society and values, an examination of the male gaze. The painting is itself a copy of  Titian’s Venus of 1538 and in replacing the original virginal and romantic nude goddess with a hooker Manet expected, and duly received, widespread opprobrium. He had however in one fell swoop replaced the classical ‘nude’ with a shockingly ‘naked’ woman and started a continuing debate on sexuality and the male gaze. As one of the most studied paintings in art history, a quick ‘google’ will reveal much more about this fascinating and ground-breaking painting that is well-worth investigating further. 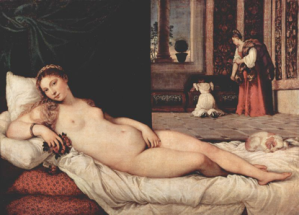 There is more though. Ferry seems to think that Olympia had ‘notoriety’. She had not. The whole idea of the painting was that she was the very opposite – an anonymous  and symbolic naked woman. As for a ‘femme fatale’, this should be a ‘dangerous seductress’, leading and tempting men in to danger and despair – both alluring and mysterious. I hardly need to say again that Manet’s Olympia, lying bored and available as she stares scornfully at the male viewer is not the ideal representation of this archetypal persona.

Bryan, bless him, then signs off with an absolute corker. The painting is aparently ‘a forerunner of some 20th century pop art’. Really? If by ‘Pop Art‘ he is referring to the sort of art found on the cover of ‘pop’ albums (I would not put the excellent Roxy Music in that category by the way), then I guess that might be true? Otherwise, I am afraid Mr Ferry is talking out of his arts.

To be fair, before I go, I must quickly say that Ferry is no artistic philistine, and note that he has been observed to be a selective collector with a ‘good eye’ who has accumulated a substantial collection of British 20th century art. His collection incudes works from Bloomsbury group artists like Vanessa Bell and Duncan Grant as well as Vorticist Wyndham Lewis and Augustus John. Perhaps he needs to go back to his student notes?

As for the virtues or otherwise of the ubiquitous Kate Moss as either a ‘femme fatale’ or an ‘Olympia’ I leave you to your own decision. I made my choice long ago!

You are currently reading bryan ferry rewrites art history at a kick up the arts.