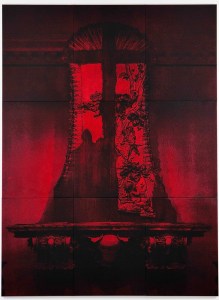 St Paul’s Cathedral is not the usual location to be supping a glass of (rather nice) wine whilst attending an opening. However it is where I recently found myself whilst viewing Mark Alexander’s Red Mannheim after its transfer from its more conventional hang at the Haunch of Venison.

Queen Victoria famously complained in the mid 19th century that St Paul’s was ‘most dreary, dingy and undevotional’.  Indeed Wren’s baroque monument remains a sober environment, the largely grey interior only relieved by the occasional golden glow of gilt ceilings. For a while however, part of the nave will vibrate red with two works by Mark Alexander – transferred from The Haunch of Venison.

Red Mannheim is Alexander’s re-interpretation of the Mannheim Altarpiece, an 18th century rococo masterwork, damaged in Allied bombing and removed by the Russians. Returned sans cross, Virgin Mary and other embellishments there remains uncertainty over their fate. This fragmentary piece of history intrigued Alexander, not only as wartime survivor but a monument to loss, a shadowy remnant.

Alexander is an enigmatic figure who looks at memory via his own likeness or re-imagined icons. In the photo-realist Baby Paintings (1966), he questions persistence of memory whilst lamenting the passing of time, whilst in Darker Gachet (2005) Van Gogh’s masterpiece is multiplied in black questioning collective memory and representing public absence. He works painstakingly only having produced twenty-two works since 1993, each immaculate, Red Mannheim no exception, being eight years in gestation and subject to repeated experiment. Ambitions for quality are only matched by breadth of ambition – with the Shield of Achilles (2003) he, quite seriously, aimed to paint the ‘greatest picture ever’.

St Paul’s seeks to ‘examine the encounter between art and faith’, other current projects being via sculpture and video – Anthony Gormley’s sculpture Flare II, represents creation and the birth of the universe whilst Bill Viola’s altarpiece on the theme of Mary and Martyrs is to come. Alexander however has pronounced himself ‘non-religious’. So what are we to make of Red Mannheim- both individually and in context? A lack of faith did not stop Henri Matisse creating a chapel at Vence, Mark Rothko a chapel nor Gerhard Richter Cologne Cathedral’s windows. Although these are environments for contemplation art has always been an integral part of religion, usually creating devotional objects. Recently has relationship been invited by the church as ‘encounter’ and here Red Mannheim is successful, in strong dialogue with both physical and religious surroundings.

Within the sombre setting the rich scarlet of these large works is a sensory surprise. Facing across the nave they enclose a space. Far from overawed, they dominate with a hang above eye-level. The richness of finish is apparent and colour density varies, sometimes translucent, at others opaque, ink often running. There is a resistance to deep examination but one is rewarded when the eye suddenly discerns the depths of the image. The red demands attention.

The darkness acts like a veil. We struggle to remember, gaze in to the past; when succeeding memory can only ever be partial. On the left is the vague space once occupied by the Virgin Mary and Mary Magdalene, their ghosts peering through a thumb-shaped window, or portal, from the past. Despite their absence we sense their presence.

The colour is provocative suggesting war’s anger, fear and hate. It is the blood of Jesus and victims of violence, the diabolic flames which nearly consumed the altarpiece. Alexander adds politics – the looting Red Army. Black represents physical and moral darkness plus charred remains from the fire.

The crosses outline is dominant – a symbol of memory, the crucifixion representing loss and mortality. There is however hope for the future – on the 70th anniversary of the blitz St Paul’s has selected another surviving icon. The resurrected altarpiece resisted wartime destruction, its depiction a window of hope, not only from the present back to the 18th century and beyond, but also to the future.

So far, so good. However, Alexander resists being shoe-boxed and has more up his sleeve. He was also ‘interested in how the rococo had been erased leaving a negative, a pagan sexuality. Remaining is original sin, a black hole and a phallic negative’. And the red? From perspiration-saturated dresses in a Bausch production of Stravinsky: ‘It was incredibly sexual, God had left the building’.

One wonders what St Paul’s would have made of clinging dresses and pagan sex but this exhibition has certainly ‘explored the encounter between art and faith’, and if in more ways than expected Alexander can only be applauded. These are works of power and delicacy with both overt and hidden meanings. Not only has the Altarpiece received new life, but Alexander’s work has grown more powerful. The ‘dingy’ interior is enlivened – albeit temporarily. Victoria would have no doubt approved.

You are currently reading mark alexander at st paul’s cathedral at a kick up the arts.