Its just not the done thing in the art world for an artist to have made their name elsewhere. God help an author, actor, musician or businessman with a talent in art – the art establishment will do its worst to avoid taking them seriously. Artists are required to be devoted to their trade and where any notion of their work being something other than a full-time activity damns them to the sidelines of history.

It is also dangerous for known artists to flirt with fame elsewhere. Yoko Ono has been frequently ridiculed despite her position as one of the most significant artists of her era – her sin of course was to cavort with a Beatle whilst making as much music as art. Grayson Perry‘s work is now less valid to many following over-publicity of his cross dressing and chat shows appearances. There are many more of course.

Those who first found fame outside the art world will find it even tougher. Bob Dylan and Ronnie Wood are trying their damnedest but are not accepted in the art world, their mediocre work doesn’t help. A new name to consider is James Franco. This from Franco’s Wiki entry: ‘an American actor, director, screenwriter, producer, teacher and author.’ They have obviously forgotten to add artist, since he has this year been shown at no less than Pace London. 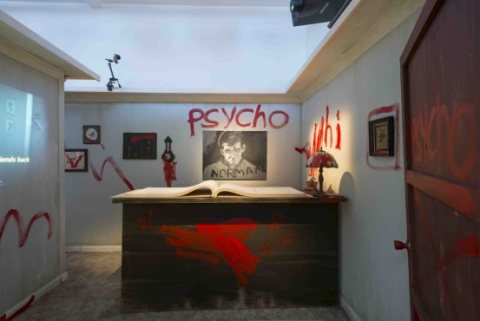 Gordon, an artist of considerable experience and a reputation, has openly acted as a curator and teacher for Franco reworking one of Gordon’s most well-known works – 24 Hour Psycho (1993). Franco states “Film is the medium that employs all art forms, but it is contained within the screen. We take this multi- form idea and pull it through the screen, so that the different forms are once again fully dimensional and a new nexus of interaction and significance is created. In this show, we go back to the original locations and images of Psycho and alter them so that once again the viewer’s relationship with the material changes. One becomes an actor when interacting with this work. Film becomes raw material and is sculpted into new work.”

This was an interesting multi-media collaboration, nicely summarised by Franco’s statement above, however, the suspicion for now remains that Gordon’s contribution was the greater. One suspects that he fleshed out Franco’s bare bones in to an interesting and surprisingly good exhibition. I shall look forward to the next and wait to see if more of Franco’s hand is visible!

phoebe unwin at the corridor reykjavik

“It isn’t in London” I hear you cry. Well, I know but I just could not resist and in any case there are plenty of London connections which I’ll come on to later on.

Recently nipped up to Reykjavik – one of my favourite cities – for a short break to watch Yoko Ono flick the switch for the dramatic Lennon Peace Tower. A narrow beam of laser light that shines infinitely in to space the Tower is Yoko’s contribution to Lennon’s memory as well as a bold statement on World Peace.

A few days before departure the excellent Wilkinson Gallery, quite coincidentally, sent me an invitation to visit the Phoebe Unwin exhibition at The Corridor (or its equivalent in Icelandic). The opportunity seemed too good to miss. For those not familiar with this particular gallery – everyone I would guess – you need to negotiate a convenient time to visit when the owner is home, drive to an apartment block on the outskirts of town, discover from a friendly local which buzzer is the right one and climb a few flights of stairs to Helgi Fridjonsson’s modest apartment.

Corridor is slightly inaccurate since the gallery space occupies a hallway and front room where works hang variously amongst rampant spider plants, behind sofas and over a desk. Helgi is himself an artist and has been running this modest space for some thirty years and seems to enjoy the experience. His exhibitor list over the years is very impressive: Ceal Floyer, Fischli & Weiss and Per Kirkeby are amongst those many artists who have exhibited here, often before they became more well-known.

I have always been a fan of Phoebe’s dreamy acrylics that cleverly express a variety of emotions and feelings as much as person or place and the selection of works here are a good representation of her work.

A lovely little show – no end date is noted on the Wilkinson or Galleri Gangur (thats Corridor to you) websites – so who knows/ It may still be running the next time you’re in Iceland!

yoko ono: to the light – at the serpentine gallery

This is a must-see for all those who like Yoko Ono. It is also a must-see for those who quite like or even dislike her. For most of her career Ono – in the UK at least –  has been pilloried as the woman who broke up the Beatles, ridiculed for being somewhat ‘bonkers’ whilst all the time being disgracefully ignored as a world-class artist.

In recent years she has become more widely recognised for her talents and this exhibition hopefully puts all the negativity behind and reinforces her admission in to the list of the best and most influential of 20th century artists.

One enters the exhibition at the Serpentine Gallery via a lobby where a brief documentary on the Imagine Peace Tower in Iceland plays. The creation of this tower of light  – first posited in 1965 before being eventually realised in 2007 – neatly encapsulates Ono’s work. Stunningly simple – a single beam of light asks us to reconsider our existence. It asks to appreciate and enjoy the essential purity of life.

These deep messages, simply executed are at the heart of Ono’s genius, regularly and consistently repeated over the last 50 years to a largely unappreciative world. At the Serpentine the works are not ordered chronologically but rather have been assembled thematically, placing works that are similar – or occasionally repeated – together to reinforce the consistency of the work over time whilst  at the same time illustrating the variations.

What is most striking is the reminder as to just how ground-breaking she was as a conceptual, video and performance artist. The first room for example has three piles of earth placed simply along the floor whilst either side soldiers helmets, filled with jigsaw pieces of sky, hang from the ceiling. This sort of presentation now almost de rigeur for any student degree show was unheard of in the early 1960’s. Then it was daring, imaginative and new. The whole Fluxus movement, of which she was a vital part, infact ripping up the white cube rule book for what was acceptable as art and its method of presentation.

In subsequent galleries one first encounters a piece of dirty canvas – no longer of course in a frame or on a wall – lying on a floor for us to walk over. There is a mirror ahead so we can see ourselves literally trampling on the previous history of art. 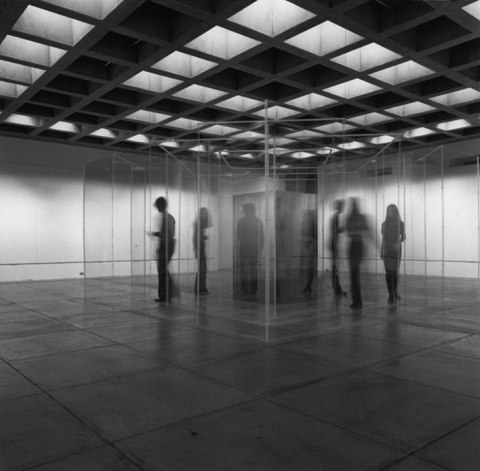 There are more iconic works: bronzes of everyday objects oozing with blood, films in ultra slow motion of eyes blinking or Lennon smiling, a glass maze, words in pencil scrawled on walls on floors asking us to imagine another reality. From the famed Indica Gallery show – where Lennon and Ono met – there is also the famed stepladder with magnifying glass attached leading to a ceiling where the word ‘yes’ is framed. John always said that if it had said ‘no or f**k you’, he would have taken little notice, but the word yes hooked him and changed the rest of his life – for better or worse.

Despite being a little brief and sparse this is a ‘yes’ exhibition which really should make us all appreciate Ono that bit more. 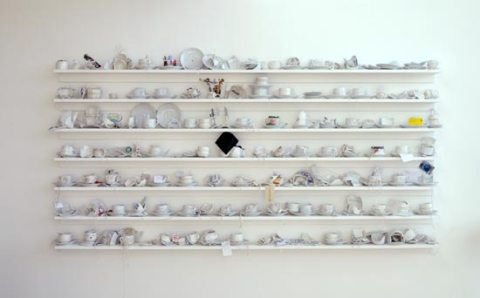 Opening soon Now & Future JAPAN supports orphaned children from the Tsunami and features a work by Yoko Ono repeated from 1966 – Mend Piece – where visitors are invited to join in by repairing broken china. A fund-raising auction takes place alongside – see website for details. Please try to support it.

Meanwhile, starting today at Earls Court, Hyper Japan is UK’s biggest celebration of Japanese ‘culture, cuisine and cool.’ I will try and drop in if only to say konishi wa to Satoshi Miki – director of those unforgettable classics Instant Swamp and Turtles are Surprisingly Fast Swimmers (see it!) and to check out the World Cosplay Summit (Cosplay being anime/manga/video dressing up – don’t ya just love it!).

Talking about someone who loves dressing up Yayoi Kusama‘s big solo exhibition at Tate Modern kicked off a couple of weeks ago. I do like Kusama, but I was not overly excited about the prospect of some 14 rooms chock full of her trademark spots. However this was a prospect that I has seriously misjudged and Yayoi, bowing deeply, I apologise. Like many, I am sure, I have been far too ready to assign her to the ‘it’s just lots of spots’ category (even the Tate get carried away in the foyer – image above!) but here was a timely reminder of all the wonderful, innovative and varied work that she has made over a long – and still continuing – highly influential career. 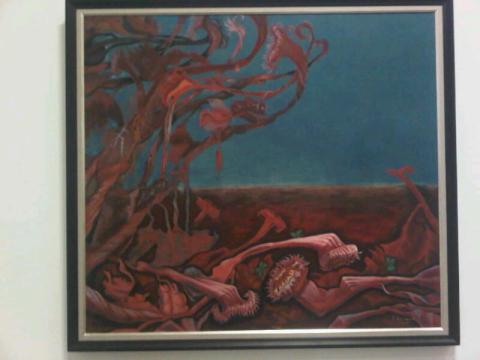 A prodigy and already exhibiting in her teens Kusama moved quickly from oils to every variety of works on paper and the first rooms of the exhibition show stunning imagination and variety. Quickly even Japan was too small for her. She soon decided, whilst only still in her mid twenties that ‘For art like mine… questioning what we are and what it means to live and die… [Japan] was too small… My art needed a more unlimited freedom and a wider world.’

So off she went to the USA first having made contact with Georgia O’Keefe – one of the most influential painters of that time: this was no shrinking violet but a hugely determined artist. She quickly switched now from the compulsive and repetitive Infinity Nets to sculpture-making, her Accumulation Sculptures covering everyday objects with repeating forms. Her huge influence on the avant-garde of pop art being clear if I simply tell you that a boat sculpture was exhibited as the ‘One Thousand Boats Show’ in a room pasted on all sides with repeating silkscreen images (of the same boat from above) a full three years before Warhol created his ‘Cow’ wallpaper and that her stuffed objects predated those of Claes Oldenburg.

Her work continued to evolve rapidly. She featured herself in her own collages, photographs and films, putting the artist at the centre of the work – a tactic we are now (overly?) familiar with a la Emin, Abramovic, Gormley etc – but back then highly original. She threw herself in to happenings, performances and installation ‘environments’. As if she had not yet done enough she returned to Japan where she briefly set herself up as an art dealer before, deeply troubled, she checked herself in to an asylum where she remains to this day. As you may have guessed even this did not stop her with production of collages, sculpture, painting and installation still continuing apace. 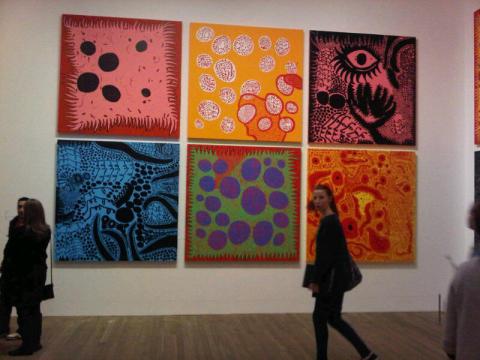 If anyone has forgotten, or did not realise, just how influential and original Kusama really was then this excellent and comprehensive exhibition is a real must-see. A highly surreal, visual treat right through until the final two room-sized installations; one an infra-red/day-glo world of multi-coloured spots that float before your eyes, the other a mirrored space containing infinitely reflected tiny multi-coloured lights. Dazzling in every way – and the kids will love it too!

You are currently browsing entries tagged with yoko ono at a kick up the arts.