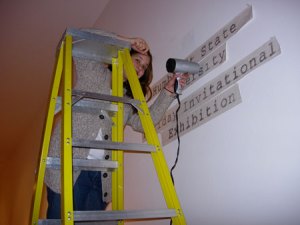 A couple of weeks back (2 Sept 10) I wrote about the shameless exploitation of graduates (and others) as unpaid gallery interns. I was pleased to note that the leading letter to the editor of The Times today was on the same subject – although referring to interns in all types of business and not just art. It was from Alex Try and Rosy Rickett representing Interns Anonymous and reads as follows:

Sir, It is high time that the UK’s hundreds of thousands of interns get paid for the work that they do and are recognised for the contributions they make to the British economy.In the past, there was a clear distinction between volunteering, work experience and low-paid work. Today, with millions of young people desperate for jobs, these boundaries have been dangerously blurred, meaning that many young adults are being taken advantage of.

Those starting their journey into work already have it hard enough with the need for a raft of qualifications, the rising price of higher education, high housing costs and poor entry-level pay. Unpaid internships are the final straw. What is worse is that everyone from political parties and the media, to multinational businesses, are at it.

Unpaid internships exploit those who do them and exclude those who cannot afford to do them. This situation is set to create a time-bomb of class division and wasted talent, preventing hundreds of thousands of skilled, ambitious young people from contributing to our culture and economy.

We call upon the Government and Revenue & Customs to end this hidden economy and enforce existing minimum wage legislation. We also call on business to adhere to employment law. Where it is taking place, this illegal activity must stop. Interns must be paid.

Interns Anonymous has been set up by two graduates currently working as unpaid interns. We want this website to be a forum for interns to share their experiences and discuss the ethics of unpaid employment. Most importantly, we want this site to be a place where YOU can tell us your story.

I encourage everyone to sign up, wish them the very best of luck and congratulate them on their resourcefulness. They deserve our support!

You are currently browsing entries tagged with slave labour at a kick up the arts.