“A Turrell Skyspace is a specifically proportioned chamber with an aperture in the ceiling open to the sky. Skyspaces can be autonomous structures or integrated into existing architecture. The aperture can be round, ovular or square.” James Turrell

James Turrell is one of the iconic figures of contemporary art, making work that is light based, often turning 2D projection in to 3D reality. Skyspaces combine natural and artificial light to create a spiritual and emotional location for contemplative observation.

Hugely respected but largely unknown by the public he recently found increased fame following a video by Drake, a Canadian rapper. Hotline Bling features him dancing in luminous rooms with Turrell-style ganzfeld effects. Turrell responded “While I am truly flattered to learn that Drake fucks with me, I nevertheless wish to make clear that neither I nor any of my woes was involved in any way in the making of the Hotline Bling video.” Bravo.

Turrell has placed his artistic heart at an Arizona volcanic feature – the Roden Crater. Spotted while flying his light plane he subsequently purchased the land and has so far spent forty years creating a huge, cosmic observatory, shaping chambers and tunnels to play with the light of the sun, moon and stars.

A recent visit to Lech in the Austrian Alps provided an opportunity to take a look at one of his latest Skyspace projects. We recently reviewed his spectacular exhibition at Houghton Hall near Norwich (see review here) and commented upon the seemingly unlikely nature of the co-operation between historic British mansion and Turrell’s conceptual light-based art.

The project is actually a new commission derived from a failed attempt to retain Anthony Gormley’s Horizon Field permanently in Lech after its scheduled end in 2012. The organisation that had been formed, The Horizon Field Association (www.horizonfield.com), remained in place with the revised aim of bringing new art to the region and has proposed the Turrell Skyspace in consequence.

Once again there is an unlikely home for this latest collaborative venture. The Allmeinde Commongrounds (www.allmeinde.org) is a hard to find building on a side road of a Lech suburb and it is here that an exhibition detailing the project as well as exhibiting some of James Turrell’s work is taking place. A beautiful new Austrian style conversion has been developed both as a concept and a building with a meeting space for art dialogue, a contemporary art & architectural biased library and exhibition space.

The first floor features a series of woodblock and aquatint prints of his well known ellipses. “I love the ellipse,” says Turrell. “Planets orbits are elliptical. It’s a very pleasing shape.”

There are also one of his hologram series, editions of Roden crater maps and images plus bronze and plaster sculptures of one of his earlier Skyspaces. A film (sadly in German only) plays in a screening room downstairs. All moderately interesting, but the real interest lay in the plans for the potential Skyspace laid out in a ground floor room. 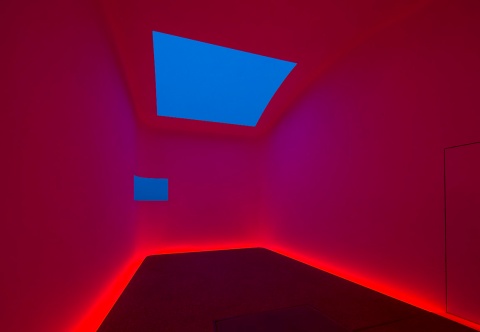 The location is hoped to be up at 1800 metres altitude close to local ski pistes and walking trails. An underground tunnel will lead to a room with an elliptical (again) opening to the sky. Many planning and practical issues have been overcome and construction is planned for 2017. Let us hope that the funding manages to reach its target and we hope to report from Lech in less than two years time!

James Turrell, The Skyspace Lech Project can be seen at Allmeine Commongrounds until 2 April 2016

One of my most eagerly anticipated exhibitions of this summer has been this: the arrival of one of the giants of American 20th century art at an 18th century English country house. Not an obvious marriage made in heaven, but it nevertheless presented an intriguing prospect.

James Turrell is best known for his light art, delighting in creating three dimensional effects from two dimensional projections. Currently notorious is his work in progress: Roden Crater. Located in Arizona, Turrell is turning this natural volcanic feature into a massive naked-eye observatory designed specifically for the viewing of celestial phenomena.

So what brings this big name Californian artist to rural Norfolk? Certainly his Arizona work suggests an attempt to create his own Stonehenge-style heritage. One could suggest that taking an English pile and adding contemporary light interventions also seeks to create a similar link that merges past and present. Perhaps I’m being rather fanciful but in any case Lord Cholmondeley has been a devout collector for many years and already had a number of works installed at the estate.

One of these belongs to his numerous ‘Skyspaces’ that are scattered around the world. An oak hut has a square hole in the ceiling framing the changing sky and transforms the viewer’s perception of light distance and colour. What is real? Can we trust what we see? Another in a former water tower is a windowless room with a dim rectangular projection that only becomes apparent after allowing your eyes to adapt to the virtual pitch blackness.

Inside the house are some of his smaller and older works but it is the entire building which features the centrepiece of the exhibition. Ten thousand or so coloured LEDs illuminate the whole building in gradually evolving work/show. The white stone staircase on the western façade is a bright green, the portico glows white, colonnaded galleries turn into tunnels of red whilst the rooftop domes glow magenta.

This 45 minute spectacle begins at dusk and can only be seen on Friday and Saturday evenings, so I hardly need to add that this is of course the time to plan your visit. Take advantage of the later closing times – the restaurant will be open for dinner bookings whilst a pop-up café on the west front will also provide drinks and snacks.

Once highly unusual this type of exhibition seems to have become more common in recent years. You may recall that only last Autumn we were raving about the stunning Ai Wei Wei exhibition at Blenheim Palace. That exhibition was a huge success and LightScape is a similar triumph. Another do not miss exhibition, or should I say, experience.

You are currently browsing entries tagged with Roden Crater at a kick up the arts.