You have already seen Barbara Kruger’s work. Whether you realise it or not is a different matter, but the bold graphic design and powerful statements that typify her work have infiltrated the world of western consumer culture and have strongly influenced the world of media around us. You will recognise it on advertising hoardings, T Shirts, shopping bags and political banners. 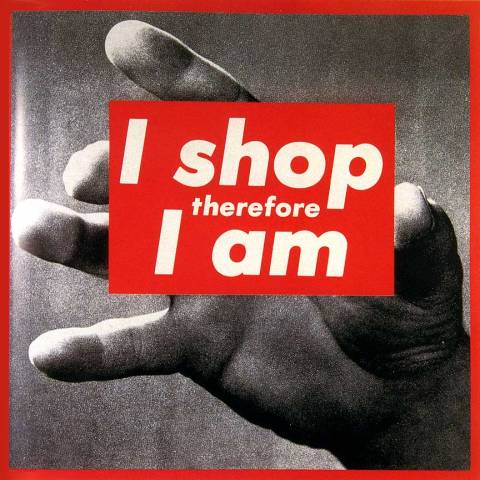 Kruger’s instantly recognisable work combines bold lettering, colours and dramatic juxtapositions of text and image. Through ironic appropriation of specific slogans and imagery she deploys the visual strategies of mass communication in order to challenge the often manipulative logic at work in the language of advertising, television and other media and the role of Western consumerist culture. 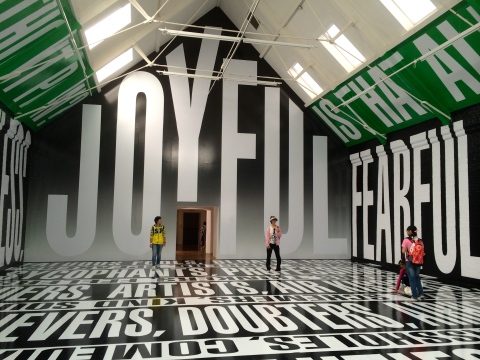 Working since the 1980’s she is considered a vital element of the Pictures Generation – a group of artists including the likes of Richard Prince, John Baldessari, Cindy Sherman and Sherrie Levine that appropriated images from consumer culture questioning things like gender and identity.

Kruger’s latest exhibition at Modern Art Oxford comprises different strands of her work – a site specific text installation, multi-channel video and her trademark collages. The first work that you encounter having ascended the stairs in to the spacious first floor gallery is untitled ‘architectural wrap’ that impressively covers the covers the entire lofty space.

Over the floor variety of black and white words list supposed categories of people as varied as posers, fatuous fools or survivors. One might be happy to be considered grouped with intellectuals and professors as well as perhaps with doers and winners but to be labelled within sycophants, fatuous fools, jerks or airheads however may not be quite so desirable.

Here then is a potted selection of labels that we, consciously and unconsciously attach to those around us and Kruger cleverly forces us to consider our complicity in categorising not just ourselves but those around us. On the walls in words up to thirty feet high we are meanwhile invited to ponder statements like Be Here Now, Remember Me or Is That All That There Is 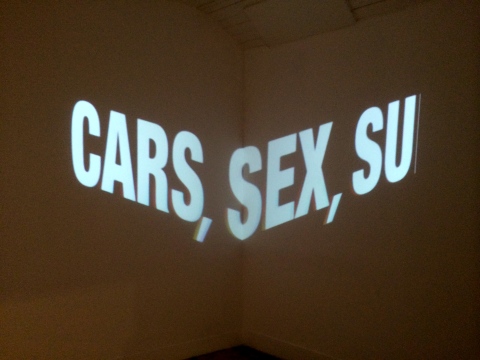 In the middle gallery a selection of her 1980’s pasted collages is presented – works that evolved from her work as a Conde Nast designer. Including Talk Is Cheap and You Kill Time these modest black and white pieces set the template for iconic future works like I Shop Therefore I Am or Your Body Is A Battleground.

Finally, Kruger’s video Twelve, 2004 comments on the absurdities of human interaction. Members of staged four-way interactions are projected on to the four walls of the gallery surrounding us. Whilst we see the expressions of the actors and hear their words, their ‘real’ thoughts are presented in written form as a news-channel style ticker-tape across the bottom of the screen challenging any cohesive narrative.

Barbara Kruger is at Modern Art Oxford until 31 August 2014

You are currently browsing entries tagged with Pictures Group at a kick up the arts.