Iain Andrews, you may recall, had his ‘fifteen minutes’ of fame as one of the few painters featured on the BBC’s ‘School of Saatchi‘. Inevitably, given that Tracey Emin was one of the judges, anyone with any recognisable talent with a pencil or brush was immediately discarded – conceptual art installations only please! 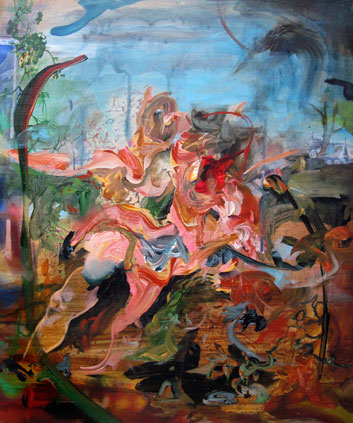 I am sure that much more than ‘fifteen minutes’ will ultimately come Ian’s way as this is an artist with real talent. He has just won the Marmite prize, competing against 48 other talented artists and was last year shortlisted for the Jerwood Prize. 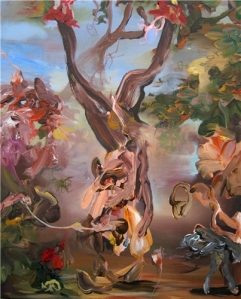 Iain’s paintings take an image from art history to begin his dialogue with the past. A painting by an Old Master that may then be rearranged or used as a starting point from which to playfully but reverently deviate. His recent work is concerned with the ‘struggle to capture the relationship between the spiritual and the sensual – apparent opposites that are expressed through the conflict of high narrative themes and sensuous painterly marks. The sheer enjoyment of making these marks is not intended to drown out the appearance of the real through a curtain of expressionistic gestures, but rather an attempt to transform and redeem the form through the act of making.’

Iain treads a path that plays between the borders of figuration and abstraction, and thus slows down the viewer. His work is sensuous and material, yet also deserving of contemplation. If his works continues to develop he could go far and is worth looking out for.

You are currently browsing entries tagged with jerwood prize at a kick up the arts.