100 Works Of Art That Will Define Our Age – Kelly Grovier

This post is also published on CELLOPHANELAND* (link here)

I am usually rather sceptical about anything featuring numbered selections. Nowadays hardly anything seems to reach the pages of a magazine or a TV screen without being reduced to a seemingly arbitrary list. At best it can be of modest help where information has been distilled from something extensive or complex but at worst is simply a pointless exercise made with minimal critical judgement. The title of 100 Works Of Art That Will Define Our Age therefore aroused suspicion. How much selection was there? Was there really a nice round number? Could, or should, ’100’ just have been left off?

Numerical gripes aside this is an exceptional book. It is a formidable task to attempt to scroll forwards in time and make a judgement on how a future population will have judged art of the present day or indeed judge the art of your own era. It would also be easy to get bogged down in an almost endless series of semantic or philosophical questions but Grovier however delicately navigates this minefield with humour and skill.

He notes that Vincent Van Gogh’s contemporary view of his own ’Starry Night’ was that it was a dreadful ‘failure’ and by slipping in frequent insights such as this Grovier lets us glimpse at how the defining views of the art of the past and present are ever fluid. 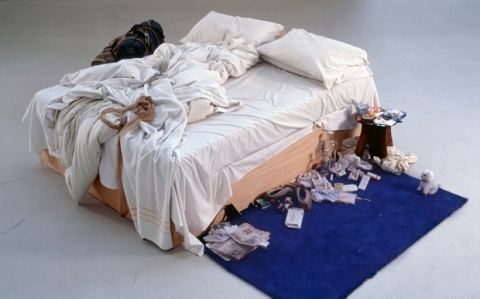 We see how the artists of today continually draw from the past and how meanings flow in two directions. Great art never finishes but instead forever participates having the power to alter the art of the past as well as to influence the future.

Grover actually creates a definition of ‘Our Age’ by selecting art from about 1990 to 2010 leaving a certain amount of critical weight to have already been applied. The notorious Saatchi Sensation exhibition from 1997 already seems an age ago and a handful of works like Damien Hirst’s ‘Shark’ and Marc Quinn’s Self are naturally included. Many others like Olafur Eliasson’s Weather Project for the Tate Turbine Hall, Jeff Koons’ Puppy, Marina Abramovic The Artist is Present and Tracey Emin’s ‘Bed’ seem natural choices, neatly included in sections with titles like ‘Is All Art Nostalgic’ and ‘Can Art and Life ever be in Sync?’.

At the same time one does wonder whether the likes of Jeff Wall, Cristina Iglesias, Walid Raad, Sean Scully and Sheela Gowda really define our age. I dont think so, and it is a stretch to think that as many as a hundred works can possibly define an age. If we look back another thirty years to Pop art how far do we see beyond a handful of names like say, Warhol and Lichtenstein? Who knows even if the period 1990 to 2010 will ever make its mark on history or fade in to a forgotten mist? 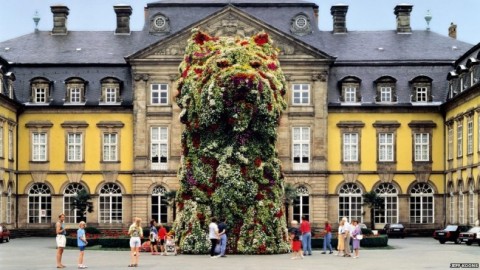 However, as one progressed through the book, the pleasure in looking back at some of the great works of our era and reading Grovier’s beautifully written and insightful analyses will dissolve all doubts. It reads easily and gently expands our appreciation of works that we perhaps doubted or misunderstood. It may, or may not, in the end include the works that define our age but perhaps it is best viewed simply as an exemplary record of memorable recent art.

This post is also published at CELLOPHANELAND* (link here)

Art Visionaries is the latest publication from Laurence King Publishing, specialists in publications on the creative arts. This handsome and substantial softcover carefully lists seventy five of the ‘most influential figures in the history of art’ with an admirable clarity. Each artist is introduced on a double spread with a full page illustration of a key work and then a few hundred words that attempts to explain both their significance and artistic lives. 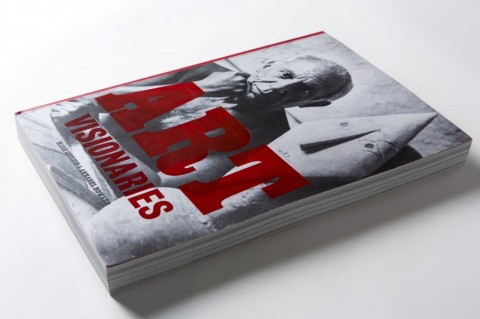 The copy is well written and one can only admire the self control and skill required to abstract the life of say, Picasso, in to such a brief and highly readable summary. The writers manage to include snippets of interest and plenty of snappy quotes, useful even for those who may feel that they already know these artists well. “Nobody can own this project, nobody can buy the project, nobody can possess the project or charge for tickets” stated Christo & Jean-Claude, whilst Kasimir Malevich observed “I have dragged myself out of the rubbish pool of academic art“.

A further double page spread illustrates more key works with a useful graphic artistic timeline. The extra illustrated pages allocated to each artist are nice but perhaps a double-edged sword. Whilst allowing images of more than one key work it still cuts short a deeper analysis. As an example Gerhard Richter, not unusual as an artist who went through a number of styles in his lifetime, does not get any of his abstract works featured.

Although it is not immediately clear from either the cover, this is a list of 20th century artists. There is also an almost total absence of artists from China, Africa, Asia and Oceania, along with Native and Folk artists and, although not stated anywhere, this volume therefore represents ’western art’ only. Fine, but really this should be clear in the cover notes or introduction.

To me there was a bias towards American artists and with the exception of Frida Kahlo, Nam Jun Paik, Yayoi Kusama, Mona Hatoum and Gabriel Orozco the remaining entries being Western European and Russian. The Brits do not do so well either – Henry Moore, Francis Bacon and Andy Goldsworthy are the only ones other than Hirst and Whiteread in who make it in. 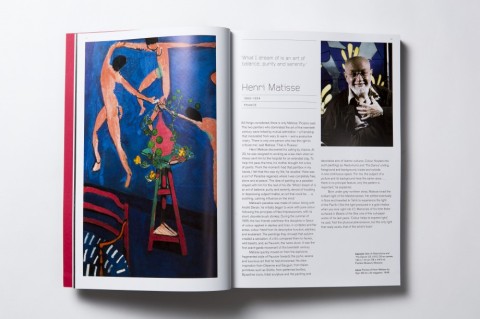 There were some tough choices at either end of the century. Gaugin & Cezanne for example probably died too early in the 20th century to deserve entry but it is harder with those like Munch, who was a key influence for the Fauvists, exhibited with them and worked until his death in 1944 but perhaps harshly does not find himself included. At the end of the century had the artists working in the 1990’s yet done enough?

It is of course a thankless task to condense a roll call of thousands down to any sort of ‘popularity contest’ and everyone will find some of their favourites excluded and will disagree with some of those included. There are difficult choices, Italian Futurist Filippo Marinetti is featured but Vorticist Wyndham Lewis misses out. Unforgivably Max Ernst doesn’t feature and neither do Man Ray, Kurt Schwitters or John Baldessari – all true visionaries, whilst a number of mediocre but worthy artists are included. Personally I could have done without Rachel Whiteread, Mona Hatoum, Anish Kapoor, Jeff Wall and Sophie Calle. Richard Long is surely better than Andy Goldsworthy and aren’t other Arte Povera artists more deserving than Alighiero Boetti.

Interestingly, other than on the cover there is no mention of ’Visionaries’. This is quite a powerful word and implies rather more than a list of big name artists from a specific era. A typical relevant definition is ‘a person with the ability to imagine how a country, society, industry etc will develop in the future’. If that was the case with any of the included artists it was neither evident or elucidated by the text. Despite discovering the fact that the book is actually part of the publishers ‘Visionaries‘ series (Architects, Design, Photography etc that are strangely not mentioned anywhere in the book) the impression is left that the title does not represent any sort of driving force behind the selection process.

Even if Art Visionaries could have been something more – perhaps a more detailed analysis of those artists like Picasso, Duchamp and Beuys who could have been perhaps considered as most ‘visionary’ – this is nevertheless an excellent, highly enjoyable and nicely designed volume well worth a place on your bookshelf.

You are currently browsing entries tagged with Jeff Wall at a kick up the arts.