david hockney: a bigger picture at the RA 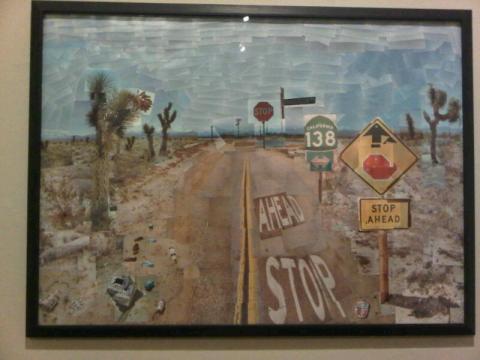 Once we are past the excellent four seasons of Thixendale Trees of the central hall, inspired by Monet, the show is largely chronological. From some early student works (my preferred) that already show his prodigious talent, we move on to American landscapes that include the clever photographic joiner Pearblossom Highway. It is cleverer than I thought – did you realise that the right side of the picture is the drivers view, the left the passengers – all signs and instruction versus casual observation? No, neither did I.

More, many more, landscapes follow – smaller watercolours and oils from direct observation, ‘tunnels’ of tracks and roads, Woldgate woods and the Arrival of Spring’. Perhaps too many, but undeniably showing his clarity of vision and clever observation. There is enough variation though: there are the changing viewpoints of the multi-canvas paintings that drag you right in to the landscapes; the almost surreal Hawthorn blossom paintings; clever i-pad drawings including the huge ‘how did he do that on an i-pad’ ones of Yosemite; the vivid colours of Woldgate woods where darkest winter is transformed by brilliant colours. 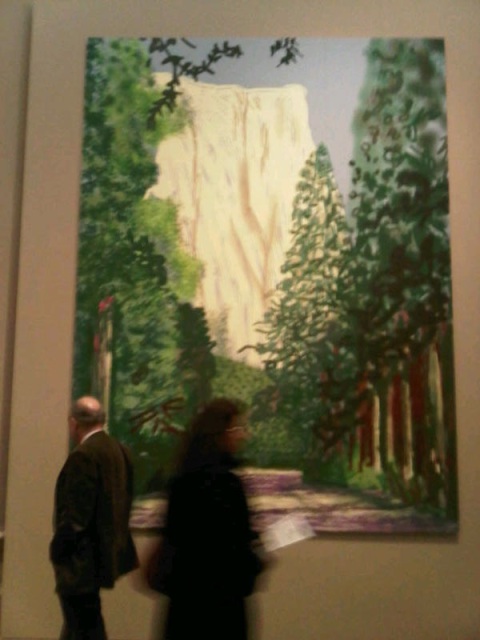 There is film too. Made with nine cameras Hockney’s converted vehicle trundles along country lanes whilst recording – Google street-view-like – whatever it passes, largely the landscape of course but litter, passing cars and occasional cyclist not excepted. Each film is shown side by side with another of the same location (both same and opposing views) in a different season. Here is nature in glorious close-up and it makes us look – hard, much harder than we expect. We look at the weeds and hedgerows in fine detail observing everything anew – this is Walden on wheels.  The films too reconcile his key themes – looking, time, memory, movement and change.

Of course one could be critical about some of the work. Personally I found The Arrival of Spring in Woldgate – the 32-canvas centrepiece of the exhibition – rather a disappointment and over-stylised, but really, who cares? This is wonderful exhibition from our greatest living artist and it should be celebrated that at 75 years of age Hockney has produced such a large and inspirational body of work. Forget Leonardo – this is the biggest show of the year. Whatever its flaws this is the must-see of a summer.

You are currently browsing entries tagged with i-pad painting at a kick up the arts.