Have you ever looked at a painting and wondered what might happen next? What about if the sun set a little or the model turned around? OK – I know that moving pictures have long been with us – the current Muybridge exhibition at the Tate giving early insight in to its origins – but Dutch artist Jacco Olivier, whilst combining the arts of animation, film and painting does actually create projected works that owe more than usual to the traditions of painting. 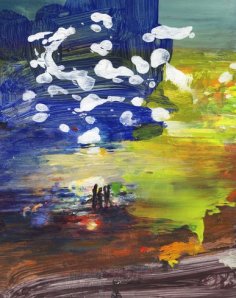 Using bold colours and free brush strokes Olivier repeatedly reworks initial paintings, the photographs of each stage in its development ultimately becoming an, often multi-layered, animated  narrative. In his impressive painting style one glimpses the freedom of Matisse and the colours of the Fauves. Their semi abstract nature and emotional treatment of light evokes Howard Hodgkin,  the abstract qualities often resemble those of Gerhard Richter.

There is little consistent theme to the works. Instead we are given a window in to a world where we glimpse what seem to be random, informal and seemingly insignificant scenes – simple scenarios from everyday life taking place in their own dreamlike environment. In the past Olivier has shown us such modest events as a plane flying overhead, a frog attempting to cross a road or whale lazily swimming by. He has said that his works represent someone “looking at the things outside, mixing them with his own memories and desires” although he does add “that’s all I need to make it work in my head, but is not necessarily something the viewer sees, or even has to see.” We do see a narrative, but it is just a part of the whole – we are still left to ponder on what is to come. There are no beginnings, no middles, no ends – no neat conclusions. 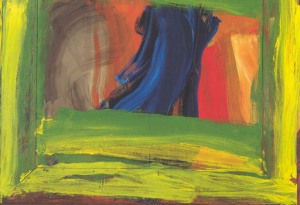 In the latest exhibition at Victoria Miro Olivier has become slightly less intimate than in the past. The works are larger in scale and have less emphasis on story-telling; the paint becomes more noticeable, the animation less so. His subjects, at least in Miro’s downstairs gallery, are traditional – the portrait, still life, landscape and the bather – the figures, where they appear, almost passive. A central family group is dwarfed as the landscape morphs about them (Reflection), a bather casually dries herself (Bath), a man slowly walks in to a pool of water (Transition), an aerial view of the countryside rolls uneventfully along (Landscape). 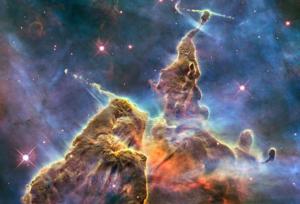 Upstairs is the impressive, twenty-four minute Revolution – a huge work that occupies the whole rear wall of Miro’s not insubstantial gallery. A day-in-the-life of an imaginary universe which, rotating slowly, reveals fantastical galaxies, clouds of gas and even a wiggling organism. The scale brings a physical presence as it evokes anything from Stanley Kubrick’s Space Odyssey ‘light tunnel’ to electron-microscope images or Hubble supernovas.

One occasionally yearns for the continuously morphing images to pause for a moment. There is a desire to sink more deeply in to the works and admire their painterly qualities; to perhaps absorb their aesthetic beauty at a more leisurely pace. Despite this one must admit that Olivier has undoubtedly created work with unique charm. Lying part way between painting and film, beautiful, intriguing, enigmatic and strangely hypnotic this is a world that I very much enjoyed being part of. Now perhaps if I cleared out the spare room and painted the wall white….?

You are currently browsing entries tagged with howard hodgkin at a kick up the arts.