I was surprised to discover that despite Lee Friedlander being one of great American photographers of recent years this exhibition is his first in the UK since 1976. It is also one not to be missed. Lined up in close succession around the extensive walls of Timothy Taylor’s pleasant West End gallery every image is of the highest quality.

The automobile and the open road are highly evocative icons of American culture. Immediately therefore one is drawn in to the ‘American Social Landscape’ that Friedlander so successfully seeks to record. Captured on a large format Hasselblad, which brings the forground in to sharp relief these are images taken entirely from the interior of rental cars.

Friedlander immediately makes one a voyeur as, using the side window and windscreen as frames he democratically records passing subjects – or perhaps I should say objects. Gas stations, motels, advertising signs, churches and the occasional Officer of the law all are carefully photographed. Shapes and angles are cleverly captured; edges, reflections and verticals neatly matched. Perhaps it is the very eyes of the car itself as it roams the dusty roads?

In remarkably clever asides there are often further images that pop up  in the wing-mirrors. Appearing to be accidental they are obviously not. Neatly framed the smaller image may encapsulate the larger or act as a comment upon it. Other windows, mirrors, advertising signs provide more grist to the mill for Friedlander’s multiple visual games. 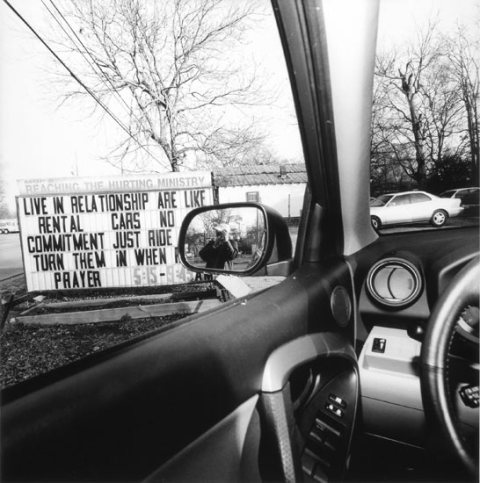 Shot over the last ten years as he has travelled around the states of the USA the series is cohesive and brilliant. Across the gallery is a recently discovered series of shots from 1964, a rejected Harper’s Bazaar shoot. The car, typically photographed as iconic objects of desire is placed down amongst the urban landscape. Sulking in parking lots, half hidden or reflected they provide a clever counterpoint to the seemingly more geometrically considered shots they face.

You are currently browsing entries tagged with exhibition at a kick up the arts.