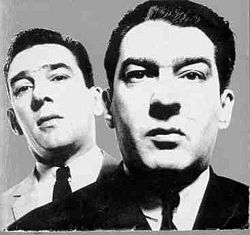 To continue on from the theme initiated in the last post there is the difficult question on the moral rights and wrongs of owning works by villains of various types. I certainly had some initial misgivings about my modest purchase of a signed copy of Kray Poems, despite the relatively low rating on the international ‘evil’ scale of these archetypal London hoodlums. What was my deeper motivation behind owning a Kray Twins  ‘souvenir’?  Naturally we are all intrigued by the mentality of – let us not beat about the bush – deranged and brutal murderers – whilst being strangely attracted by their notoriety. In the end I felt that their murderous tendencies had by now been long been subsumed by their kitsch value. They are now little more than cartoon twins with dark glasses and suits, Hale & Pace’s ‘Management’, a spoof representation of the 1960’s East End. Ultimately my little book is little more than a perverse ‘joke’ on the lack of intelligence of the average post-war gangster – The Thoughts and Poems of Ronnie Kray – Thoughts? Are you kidding me! 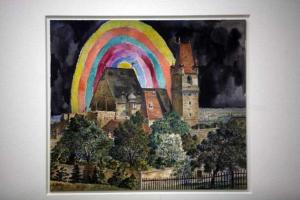 Somewhat higher up on the naughty list is someone like Adolf Hitler, who was a notorious dauber of course, refused entry to art school in Vienna before a slight change in direction. Thirteen works of his sold in Shropshire last year for £95,000, whilst in 2008 Mark & Dinos Chapman overpainted another thirteen watercolours bought for £115,000 before re-selling them for £685,000 stating that they were redeeming the work rather than Hitler – the exhibition entitled If Hitler Had Been A Hippy How Happy Would We Be. White Cube were forced to announce that they would be ‘extremely careful’ as to who the works were sold to. Whilst I could never imagine owning a Hitler watercolour I love the way the Chapmans have seized these works from the realm of the Nazi memorabilia collectors.  Now ‘recreated’  in the art world they brilliantly destroy their previous nazi-sympathiser associations and, in their new incarnation, are highly desirable and guilt-free! For an interesting Sunday Times article about Hitler art at auction click here.

I recently discovered another, rather ingenious, way to assuage guilt over ownership of an item of dubious provenance. Over an entertaining dinner with Laurence Marks of the Marks & Gran writing team (famous for Birds of a Feather, New Statesman etc) he described his dilemma upon discovering that he was the unwitting owner of a piece of very valuable nazi memorabilia. An innocently bought watch had turned out to be a relic from the notorious Nazi Von Ribbentrop. Despite excitement over the value (some £50,000) writing partner and family were quite naturally mortified and alarmed at the potential attraction of the watch to collectors of Nazi memorabilia as well as the problem of explaining away their ownership of such an item. How could one dispose of it? Should one sell it at all? Should it be destroyed? The ingenious solution was to write a play, Von Ribbentrop’s Watch, based on the story whilst the watch would be consigned securely to a bank vault, never to be sold or seen. Opening at the Oxford Playhouse (9-18 September) it is then touring, via Richmond Theatre, before reaching the West End. If the story is half as interesting or amusing as the snippets that I have heard so far it will be one to – let us say – watch!

You are currently browsing entries tagged with chapman bros at a kick up the arts.