This is not one exhibition but a trio of simultaneous shows from three great cultural  icons. Each occupies a floor of London’s Photographers Gallery, all are separately curated and feature just black and white photographic works.

Both the weakness and strength of this exhibition lie in the fact that this photography was secondary to each of them – if none of these artists were famous the works would not be worthy of exhibition. Nevertheless each show is an insight to their practices and – with varying degrees of success – acts to expand our knowledge of these culturally important figures. 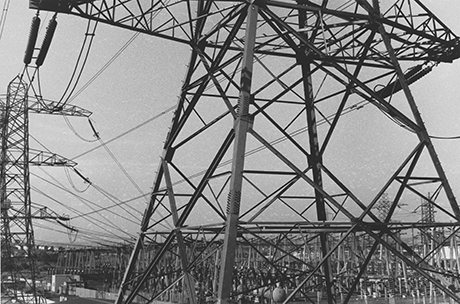 Starting on the top floor is an exhibition of David Lynch‘s work. Shot in various locations including Germany, Poland, New York, New Jersey and England, the photographs depict industrial dereliction and decay.

Formally conventional they feature high contrast, unusual viewpoints and close-ups of chimneys, wire, and rusting steel and offer obvious similarities to his iconic films, most obviously Eraserhead – there is even a similar eerie soundtrack from Lynch himself serving as background.

William S. Burroughs was one of the most influential American writers of the 20th century, yet despite this his work as a photographer is rarely acknowledged. Coinciding with the centenary of his birth and entitled Taking Shots this is the first exhibition ever to highlight his photographic work.

This exibition is the most interesting of the three. He obsessively photographed, collaged and re-collaged. Acknowledging his debt to Dada and the surrealists the cut and paste ethos also reflected his methods of writing and creating. It also showed his debt to his mother who published books on flower arranging, gathering together disparate objects with her arranged flowers and no doubt acted as a surprisingly homely influence.

Although famous as a printer, painter and filmmaker Andy Warhol’s use of photographic imagery permeates his work. In later life he was always with a ‘point and shoot’ Minox with which he shot dozens of shots of everyday life. As we know with Warhol mundanity quickly becomes art.

Most interesting are his striking series of ‘stitched’ photographs, reflecting his interest in multiples. These feature identical images arranged in grid form, which he had stitched together with a sewing machine.

Undoubtedly Burroughs’ exhibition is the most revealing of his wider work and despite the lesser appeal of the other two shows triple exhibition is well worth catching whilst it’s here.

You are currently reading Warhol, Lynch & Burroughs at The Photographers Gallery at a kick up the arts.