I have two problems with this exhibition. Firstly ‘Modern’. I guess the title says a lot. It desperately looks to confirm how modern Munch is – it is even of course being held at Tate Modern. The exhibition frequently tells us that Edvard Munch is thought of in the context of the 1880’s and 1890’s, when he did actually produce some of his work – seeking to show us that, despite our deeply held beliefs and prejudices, he is a thoroughly modern, 20th century painter who reflects upon the latest cultural and technological developments. 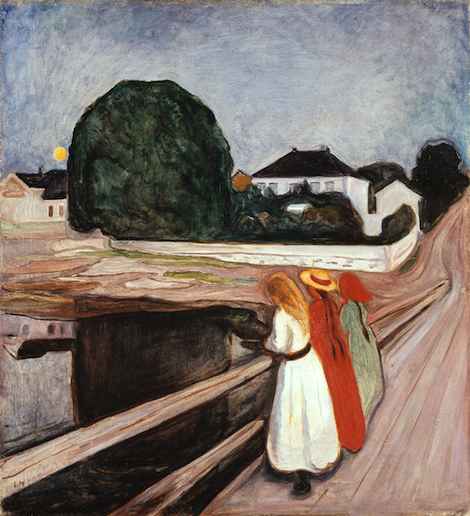 Well, excuse me for being ignorant, but I always had Munch as a 20th century artist and had conveniently pigeon-holed him as stylistically (sort of) alongside say, the Blue Riders and German Expressionists. And didn’t you too? The Scream as Impressionist/Symbolist/fin-de-siecle? I dont think so. 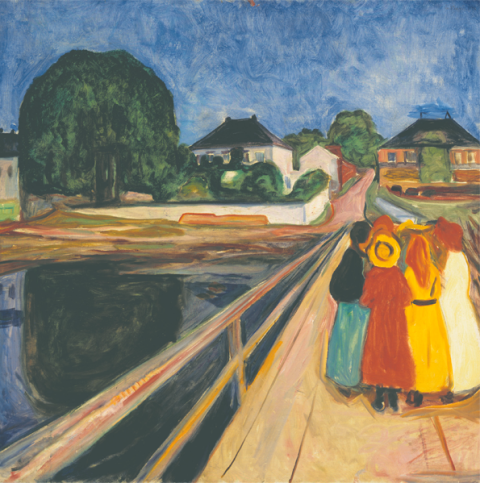 I guess accepting that Munch was already considered modern would have undermined a nice way of curating this exhibition – so they ignored it and carried on regardless.

Secondly, everywhere I went during the Press preview I was regularly cut off by suited heavies who were stopping me from approaching any artworks that lay within a twenty metre range of a nondescript middle-aged lady, who turned out to be the Queen of Norway. She was unfortunately touring the exhibition at the same speed and in the same direction (naturally) as myself and obviously could not breathe the same air as normal mortals. Very annoying. 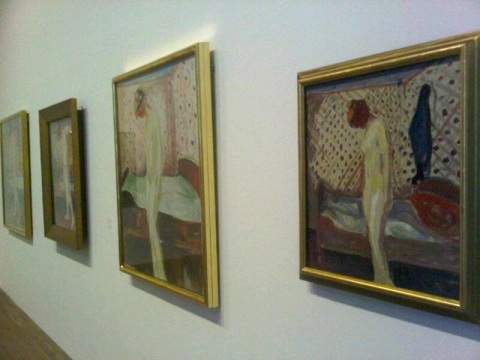 In all other respects the show was exceptionally good. Unless you are able to pop over to Oslo regularly there is little chance of finding more than a couple of Munch’s in the same place and it is hard to develop a considered opinion of his work. Here though the assembled works, often with repeated themes, allow a real opportunity to see what the great (as I now accept) artist was up to.

It was easy to see for example that the return to these certain images was not a commercial decision. Often separated by many years the works developed and changed ‘I build one painting on the last‘ as he said. 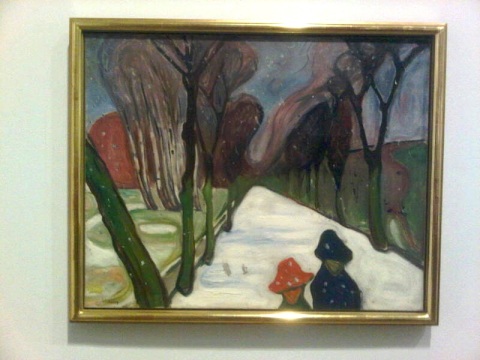 There was a clear view of his use of handling of space with exaggerated perspective, strange compositional arrangements and unusual viewing angles – perhaps linked to Japanese prints or his own experiments with photography and film.

He frequently suggested the sense of motion with blurring and figures approaching the viewer directly. This was re-inforced by the exhibition of his own distorted and shaky photographic and film works (presented here with rather exaggerated importance I felt).

He frequently engaged with and investigated other aspects of perception. Some were connected with scientific discoveries of the era – X rays, radio waves, others with photography – double exposure, out-of-focus images. He looked at visions of claustrophobia and tried to put on canvas the problems he has with an eye haemmorrhage.

The whole exhibition puts together a timely reminder of just how good an artist Munch was. The absence of the Scream (in any version) was not important – infact it actually allowed you to see his other works undisturbed by the taint of hard cash and demonstrated that other works are better anyway.

By the way for a ‘real’ review you should read Brian Sewell in the Standard – link below!

§ One Response to edvard munch – the modern eye at tate modern

You are currently reading edvard munch – the modern eye at tate modern at a kick up the arts.