garden of reason at ham house

The domino effect of great house followed by great house, falling to the charms of the happy marriage of landscape and art, is inescapable this summer.  A local National Trust property close to me, Ham House, is this summer showing Garden of Reason, curated by Tessa Fitzjohn.  Running from now till the 23 September, it is open everyday save Fridays. The show uses the hook of Ham House’ importance during the mid 16th– 17th centuries and transposes some of the ideas that were being developed during that period, the Age of Reason, into a garden setting, hence the title.

However, if the setting for the show and the curatorial idea are historical, the final artworks are very much of our time and the National Trust has assembled a significant internationally regarded, cross section of UK based artists featuring Alexandre da Cunha, Tom Dale, Daphne Wright, Ruth Proctor amongst 13 others.

The Age of Reason is a broad term used to cover many significant events in British history including the Reformation, the Civil War as well as new scientific discoveries led by Galileo and Newton. In this show it is not precise history that is being referred to, but the ideas and whimsies of the period.  There are eight newly commissions shown in the garden, others are performance or community based pieces that are viewed at specific times (see the National Trust website for more details). 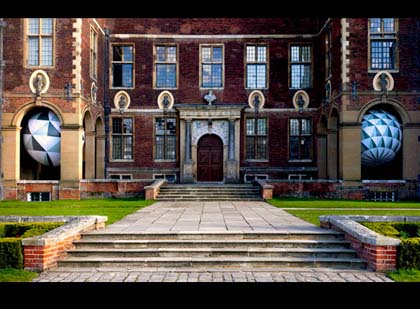 There are some excellent pieces that are well worth to trip to this leafy suburb.  In particular I loved Alexandre da Cunha’s Compass, a sculpture that invites the viewer to walk up to survey the grounds, alluding to the mercantile and scientific themes of navigation, mapping and discovery.  Four mobile staircases (similar to the ones you walk on to get onto an airplane) are angled so that the top platforms are angled towards one another.  True to his practice of appropriating materials and objects and reconstructing them to offer new meaning, this piece is positioned powerfully with, depending upon you point of view of aristocracy, subtle irony.

Mounting Compass enables you to get a good view of the lawn based part of Ruth Proctors’ Weight of Air, its companion part being sited next the entrance of Ham House itself.  Clever positioning of the white chalk marks inspired by the shapes of the famous Cloade Pineapple that is synonymous with Ham House,  adds weight to the ideas that Compass responds to.  The great discoveries of the periods were still in their infancy and development and the abstracted shapes remind us that there was a time when the world was still considered flat and maps presented an unrecognisable charting of our world.Kathleen Herberts’ Theatre of Flora, is a simple but powerful reference to the 17th Century’s period of Tulipmania which could be remarkably analogous to todays reporting of the global and Eurozone economical crises.  Tulipmania gossip, reports, anecdote and information is played intermittently across a network of loudspeakers placed in the fountain garden.  It is informative as well as utterly engrossing to hear 17th century  views of the financial hysteria created by massive speculation in the market for tulips.  As seen in Herberts’ previous film Stable, she has an uncanny knack for illuminating historical facts long forgotten but representing to the audience is a fresh and engaging way.

All in all, I take my hat off to the curator and the National Trust team for being brave and taking a risk in very clearly trying to appeal to a younger audience. You get the impression that they decided that they simply had nothing to lose and potentially much to gain by speculating on the publics’ interest in art.

You are currently reading garden of reason at ham house at a kick up the arts.