I am not a big fan of Christmas. It is a big excuse for business and media to assault our eyes and ears every moment of the day – with promotions, sales, ‘opportunities’. The worst of the lot is the buzz around the possible Christmas ‘Number One’. Yawn. So here is a campaign that I can thoroughly approve of. A few minutes of silence could be at the top of the charts this Christmas with a big Facebook promotion having been started in favour of John Cage’s famous 4’33”. The American composer wrote Four Thirty-Three (as he said it) in 1952 for any instrument, or combination of instruments, the score instructing the performer not to play throughout the three movements of the piece.

Contrary to common belief, it is not however silence that Cage is actually giving us during these 273 seconds. The piece was instead written to highlight the ambient noise –  the ultimate extension of his Zen Buddhism beliefs and his work in experimental music. He wanted to show that it was possible to make music not only with instruments, but also using sound. 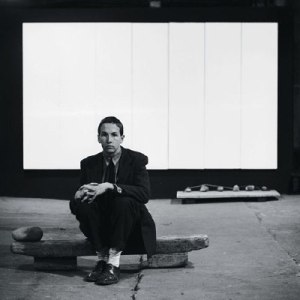 Interestingly Cage himself has said that his primary inspiration came from the visual arts with Robert Rauschenberg‘s White Paintings of 1950. As with 4’33” it was not the work itself but the external aspects that were most important – in this case the changing light that fell on to these ‘blank canvases’. Their importance is further indicated by the fact that they actually hung above the stage during the very first performance of the piece at Black Mountain College.

Here is the full orchestral version of Cage’s 4’33” as performed in the Barbican:

This is what Cage said about its first performance in New York:

They missed the point. There’s no such thing as silence. What they thought was silence, because they didn’t know how to listen, was full of accidental sounds. You could hear the wind stirring outside during the first movement. During the second, raindrops began patterning the roof, and during the third the people themselves made all kinds of interesting sounds as they talked or walked out.

Cage was based at Black Mountain College where his he began teaching at his legendary New School classes. Hugely influential his students included for example pioneers of performance art Allan Kaprow, George Brecht, and Al Hansen. His influence was felt far and wide – would minimalism and fluxus have happened without him? Cage regarded 4’33” as his most important piece of work and these 273 seconds of  ‘silence’ have helped shape the visual arts (not even mentioning other arts) ever since.

Going farther space/absence is a big theme in modern and post-modern art – from Malevich‘s Suprematist Composition White on White  to Martin Creed’s The Lights Going On and Off. It is far to big to touch on now – but please take a look at previous posts that very briefly touched on some aspects with air in art and air in art – postscript.

You are currently reading sound of silence at a kick up the arts.