There has been a swathe of ‘remarkable’ discoveries reported recently. It reminded me of a couple of my favourite ‘finds’ in the last year or two which I have sumarised here, along with last weeks revelation from California which I have put first. 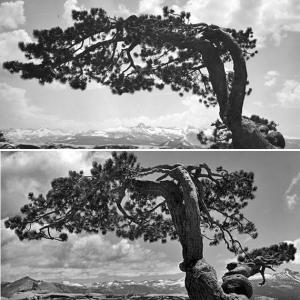 This was the news that given this week to a Fresno man, Rick Norsigian, who stumbled upon a couple of boxes of Ansel Adams glass plates whilst checking out an old barbers chair at a local clear-out. He suspected they had some value, but only after much research did the truth, and the multi-milllion figure emerge. A team of experts had concluded the 65 negatives were the early work of Adams and rescued from a fire in 1937.

His reaction? When I heard that [figure], I got a little weak,” he said. Too right!! See the full story here.

The toilets of a pizza restaurant are not the best hunting grounds for baroque masterpieces, but the York branch of Ask proved an exception. It was here that Mario Tavella, head of furniture at Sotheby’s, spotted a carved gilt-wood console table that was the missing section of a 17th-century masterpiece that had long been presumed lost.

“This was a console I have been looking for for the last 20 years,” stated Tavella. It was missing stand for a cabinet adorned with intricate miniatures that Sotheby’s had kept in storage on behalf of a client. The reunited work  by Giacomo Herman“ the most important piece of Roman baroque furniture that has ever appeared on the market” sold for £1.1 million at Sothebys (details). Full story here

‘Only in Ireland’ is a phrase that instantly springs to mind with the following story about a collection of 4,000-year-old gold jewellery. Spanning sixty-five years it incorporates not only a remarkable find but a robbery, waste bin and a desperate chase!

In March 1945 a farmer was cutting turf in when he found three tiny pieces of gold jewellery – two discs, and a crescent-shaped collar. Not realizing its value he gave it to his local chemist to put into his safe, where it remained safely locked away. That is until the night of 27 March 2009 when two opportunistic crooks targeted the pharmacy, also taking the entire safe. In the escape the robbers had overlooked the small envelope containing he gold and had thrown the envelope into a bin bag, which they dumped in a skip.

Are you sticking with me!? Quickly captured, with cctv help, the robbers were persuaded to help locate the bag. The only trouble was that by now the refuse was due to be collected and so began a race against time to recover the jewellery. Happily they succeeded and the 4,000 year old jewellery – two of just 21 known to exist – was found.

The robbers were given credit for helping find the gold, fined and have since visited the National Museum where they are on show (the jewellery, not the criminals). Full story here .

‘Discoveries’ can also be made right there on the walls of the largest galleries. How about the identification of a work, ‘found’ on the walls of the Aberdeen Art Gallery. It had been dragged up from the basement to fill a gap on the wall only to be identified by an enlightened visitor as £1m, 15th century triptych by an Italian master Il Vecchietta. (full story here).

There are many more interesting stories than I can fit in here – including the one about the treasure-hunters who unfortunately discovered the body of a suicidal seller at a car-boot sale last summer! Meanwhile what is your favourite art-related ‘amazing discovery’ story? Please let me know!

You are currently reading amazing discoveries, missing masterpieces – and some irish thieves! at a kick up the arts.